Not all that long ago, nobody predicted Chevrolet would sell an urban commuter mini car with a small 1.25-liter engine designed almost expressly for younger folks who encounter lots of crowded big-city driving.

But the new 2013 Chevy Spark is just such a car. Its a front-drive, four-door hatchback approximately two inches shorter than a Mini Cooper. It looks as if it were squashed between two full-size Chevrolets of the early 1970s.

The original version of the Spark is on sale in Europe, Asia, Australia, Mexico and South America. While this type car is supposed to be base, affordable transportation for countries with marginal roads and sky-high fuel prices, the U.S. version of the Spark is modified with stiffer front dampers, larger wheels and electric power steering. Its also got a larger engine than offered in foreign countries.

List prices for this South Korean-developed car range from $12,245 to $15,970, without a $750 freight charge. There are LS and higher-line 1LT and 2LT trim levels. They come with a five-speed manual or four-speed automatic transmission.

I drove the responsive automatic version of the Spark at a Chevy media preview near downtown Chicago. That transmission is expected to be the most popular for urban driving, but the five-speed manual is said to be decent.

Estimated fuel economy is 32 miles per gallon in the city and 38 on highways with the manual and 28 and 37 with the automatic. Only regular-grade fuel is needed, but I expected higher economy numbers for a mini car with a small engine.

However, power door locks with keyless entry and power mirrors are not standard. Front brakes are disc units, but the rear ones are drum units.

The electric power steering is quick and precise, and standard items to enhance roadability include a StabiliTrak stability control system with traction control and brake assistbesides a Hill Start Assist feature to prevent the Spark from rolling when restarting from a stopped position on a hill.

The Spark has a tight, stiff body-frame-integral structure for sportier driving dynamics. The ride is surprisingly supple for a small car, and the brake pedal has a progressive action.

Mechanical highlights include a stability control system with traction control.

The media mid-day preview of the Spark on Chicagos crowded Near North Side and North Lake Shore Drive showed the car has a no-fuss approach to highly congested traffic, where low-speed acceleration is lively.

Taking it out after commuter hours on the citys expressways, where traffic moves very fast, would have put the car in a different light. Its engine generates 84 horsepower, with dual overhead camshafts and 16 valves. Its responsive at lower speeds, with dual continuous variable cam phasingand is said to be a low-maintenance motor.

The Spark is offered with a five-year, 100,000-mile powertrain warranty.

This Chevy doesnt need lots of powerat least with only one or two occupants aboardbecause it only weighs approximately 2,300 pounds. Still, flooring the throttle to quickly merge or pass other vehicles results in just-adequate acceleration and lots of engine noise. The 0-60 mph time reportedly is a ho-hum 11 to 11.5 seconds.

But Chevy doesnt claim that this is an LA-to-Vegas car, and it was pretty quiet at normal speeds on crowded Chicago roads. Importantly, parking is easy away from the citys high-priced parking garages and in Chicagos typically tight neighborhood spots.

Dont let appearances fool you. Four 6-footers comfortably fit, mainly because of the Sparks extreme upright profile. Still, tall rear occupants with long legs dont have much room to spare between their knees and the front seats.

The hatch has a low, wide opening, but there isnt much cargo room unless the split 60/40 rear seatbacks are folded forward with an easy two-stage maneuver.

The Spark is cleverly designed. A motorcycle-inspired gauge cluster and color-coordinated interiors help make the cockpit unique. And rear door handles are deftly hidden in the back roof pillars for a sportier look.

But some of the eye-searing colors, which include Lemonade and Techno Pink, look as if they might require onlookers to wear sunglasses.

Brighter colors help disguise the fact that this is an extremely short car. But conventional colors such as black, silver and white also are offered.

With more younger folks moving to crowded urban areas, the timing seems right for the Spark. 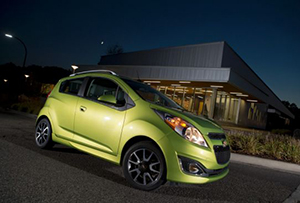 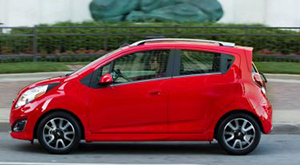 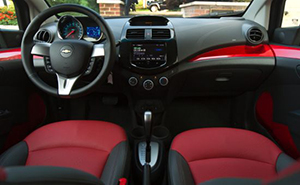 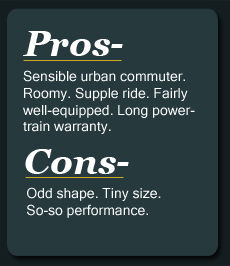